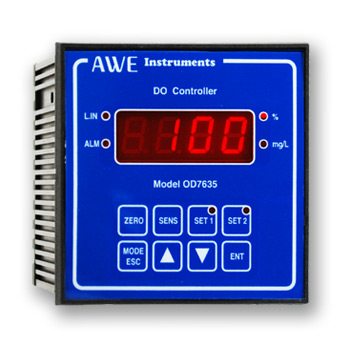 The OD7635 Dissolved Oxygen Controller is available in either surface mounting or panel mounting configuration.

The OD7635 Dissolved Oxygen Controller is a panel mounting Dissolved Oxygen controller with a large bright red LED digital display in a DIN spec. housing 96 x 96mm and is designed for the DN 47300 standard. This instrument also has a very short case length at only 95mm, allowing the controller to be mounted into compact sized control panels saving on both space and cost.

The easy to use OD7635 Dissolved Oxygen Controller has 8 buttons located on the front for easy access to the setup, configuration and calibration areas of the software. This allows the instrument to be easily setup and configured and makes periodic calibration a simple process with the dedicated Zero and Sensitivity calibration buttons.

To ease the installation of the OD7635 Dissolved Oxygen Controller the instrument is fitted with a switch mode power supply, suitable for a supply voltage of 86-264 VAC 50 / 60Hz.

The OD7635 Dissolved Oxygen Controller includes 2 x control relays for use in either High or Low operation and has a user configurable alarm relay which is operated when the Dissolved Oxygen reading is outside of parameter.

In addition, the OD7635 has a 4-20mA output isolated to 600Ω, making it ideal for incorporation into BMS or PLC systems, as well as with an online Data Logger or with a digital Chart Recorder.

The OD7635 Dissolved Oxygen controller is able to measure both saturation and concentration of dissolved oxygen.  The ranges are as follows:-

The Automatic Salinity compensation allows the instrument to adjust the concentration measurement (mg/L) according to the user input of the PPT of the chloride concentration of the sample. The automatic temperature compensation has a user selectable co-efficient with default setting 2.3% with a range between 0-4.00 % per °C.

Please contact us if you require any specific information about this element of the operation of the OD7635 dissolved oxygen controller.

The Od7635 has an industry standard 4-20mA output which correlates to the user selectable ranges. This ensures that the 4-20mA will give an accurate output corresponding to the range, with 4mA at the lowest point, and 20mA at the top of the selected range.

The 4-20mA output is isolated into 600Ω so that it is incredibly easy to connect to a PLC, Online Data Logger, digital Chart Recorder or other device.

The front panel of the OD7635 includes 8 keys that allow simple navigation of the panel mounted dissolved oxygen controllers options.  The Zero and Span for the calibration procedure are mounted on to the front of the controller.  In addition both set-points are identified with their own front mounted button, allowing their values to be easily changed.

The dedicated Up / Down arrows on the front of the controller allow for easy modification of either the calibration or set-point values, decreasing initial setup time or the time spent during periodic calibration or maintenance.

In addition to the control relays, the OD7635 has a user configurable alarm relay which is energised when the dissolved oxygen value is outside the set parameters.  It has an easy set up feature and the operator has the ability to access the most frequently used functions.

There is also a logic input on the OD7635 which takes a volt free contact closure input.  When activated, the logic input isolates the output relays, preventing them from energising.  The Logic Input can be connected directly to the alarm relay if required.

The OD7635 is a simple to use Dissolved Oxygen controller.

In addition there is a password locked configuration screen which allows the user to change the less frequently adjusted settings.

The versatility of the microprocessor, accompanied with the user friendly software, allows the programming of the functions, routine checks and calibration to easily be accomplished, even by untrained operators.  Installation of the 7635 series of instruments is intended to be into a control panel or in the optional surface mounting enclosure.