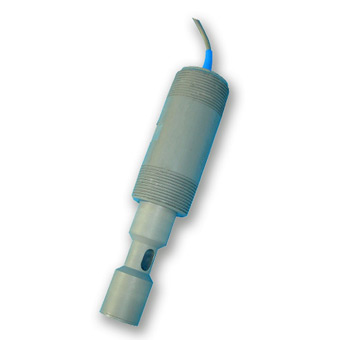 The BCT10 is a conductivity cell with built in 4-20mA transmitter.  The electronics are integrated into the housing, which means that a separate Conductivity Transmitter isn't required. The BCT10 can be connected directly to a PLC, online Data Logger, or to a controller mounted further away.

Effectively these are great at measuring electrolytic conductivity values in the higher ranges as the principle of operation is to stimulate ionic activity which is then measured. In addition, as the measuring coils of the conductivity cell are not in direct contact with the solution, they are non-fouling in solutions with higher conductivities.

The BCT10 has a fixed conductivity measuring range from 0 - 10.00mS complete with integrated temperature compensation. We factory calibrate the BCT10 to this range, to ensure that installation into a process is as easy as possible. The BCT10 can simply be immersed into the solution to be measured, and then a 4-20mA output signal corresponding to the 0 - 10.00mS range can be measured across the two wires.

The BCT10 is loop powered, which means that the same two wires which power the device also carry the corresponding signal back to the receiving instrument. The 4-20mA output is galvanically isolated to 600Ω which means that integrating the device into a PLC, digital Chart Recorder or an online Data Logger is simple and straightforward.

The BCT10 is supplied complete with 3 metres of connecting cable as standard.  We can offer longer cable lengths up to 1000m as required.

The conductivity cell with integrated electronics can be mounted into a number of different environments. There is a rear mounted 11/2" mounting thread designed so that the BCT10 can be immersed into vessels and tanks.  This is also known as Dip mounting.

In addition the BCT10 has a 11/2" thread located at the front of the conductivity cell, allowing the BCT10 to be mounted directly inline into pipe work for continous online conductivity measurements.

As a conductivity cell with a built in 4-20mA transmitter, the BCT10 works well integrating with PLC's for systems controlling external processes. The cPVC body, automatic temperature compensation and range of 0 - 10.00mS often mean that the BCT10 can be found measuring the TDS values of recirculating cooling water applications.  It is also found in CIP applications in the brewing, dairy and other food and beverage industries.

The BCT10 is a simple to use toroidal conductivity cell with an integrated 4-20mA transmitter, which offers accurate hassle free measurements, and is simple to integrate as a 2 wire device.