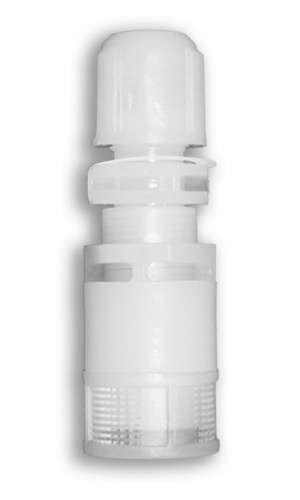 The 10414PGP foot valve and strainer assembly is manufactured in highly chemically resistant PVDF material and is designed to be permanently immersed into a chemical container such as a dosing tank.  Connection to the dosing pump is from an 8x2mm compression fitting which tightly seals over the dosing tube to provide a route to the dosing pump.

The dosing tube or suction tubing should be cut to length, allowing the suction valve to sit at the bottom of the dosing tank containing the chemical reagent.

The foot valve and strainer assembly includes a non-return valve formed from a fluoropolymer elastomer which is designed to operate from the suction effect of the dosing pump.

The 10414PGP Foot Valve & Strainer is manufactured with the following wetted parts:-

We strongly recommend checking the wetted parts of the injection valve against our chemical compatibility database or speaking with your chemical supplier, to ensure that all the parts are compatible with the chemical to be dosed. 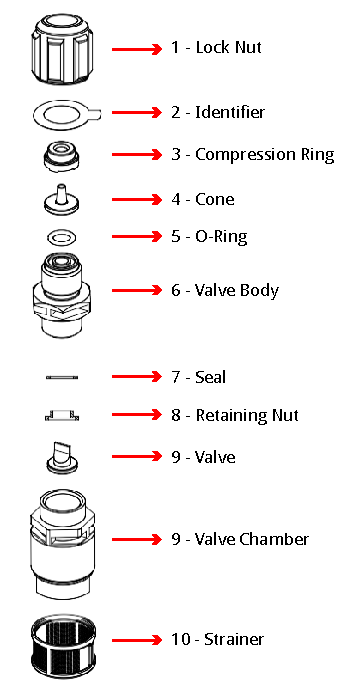 The insertion of the foot valve and strainer assembly is relatively straightforward.  If working with a chemical container such as a dosing tank, we recommend a hole specifically for the dosing tube is created allowing the dosing tube to run directly to the bottom of the tank.  This prevents a man way access or dosing tank lid from being permanently left open.

The foot valve only allows the fluid to pass one way though the valve.  This works by using a chemically resistant fluoropolymer elastomer which is specifically formed to allow the chemical reagent to only pass through during the suction effect of the dosing pump. This prevents the chemical flowing back down to the suction tubing, so acting as a non-return valve.

The 10414PGP is designed to ensure that a chemical dosing pump holds it's prime when chemical is present in a dosing tank or other chemical container.  Comprising of a non-return valve and strainer assembly, the foot valve prevents the chemical in the dosing tube from falling back down the suction tubing, due to the effects of gravity.

The 10414PGP is compatible with 8x12mm suction tubing and is manufactured in PVDF with an option between the seals, O-rings and non-return valve material.  The 10414PGP is designed to ensure a long operational life, even when working with process strength chemicals.