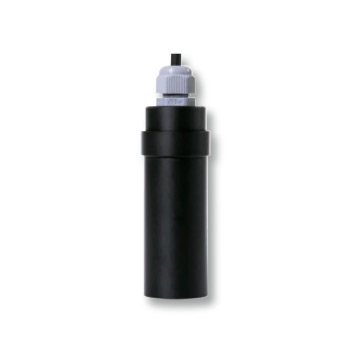 The OD8525 is a dissolved oxygen sensor designed for mounting inline or in the flow of pipework. The OD8525 has integrated electronics to provide an industry standard 4-20mA output, corresponding to the concentration of dissolved oxygen or the percentage saturation.

The measured dissolved oxygen is not consumed by using this method (unlike with Polarographic or Clarke type Sensors) and it is not dependant upon a constant flow of solution.

The instrument is designed to IP68 specification with mounting flange for the OD8525 to be held in place in the inline holder. This allows the OD8525 to continuously measure the dissolved oxygen concentration or saturation in a flow line application.

The 4-20mA output signal from the OD8525 is isolated to 600Ω and is suitable for directly connecting to PLC, online Data Logger, digital Chart Recorder or a 4-20mA controller, such as our BC7635.

As a loop powered device, the OD8525 is powered from the same 2 wires that also send out the 4-20mA signal to the receiving device.  This makes the OD8525 incredibly simple to ingrate with PLC's and other control equipment.

The OD8525 is able to measure the following parameters:-

Using a personal computer with a hyper-terminal client, the user can interrogate the OD8525 and set secondary environmental parameters to compensate to the dissolved oxygen measurement. The secondary parameters are as follows:-

Using the hyper-terminal client, the zero point and sensitivity can be adjusted, as well as the output 4-20mA current signal.

We can adjust any of the settings or output measuring range at the factory, prior to the OD8525 being despatched.

The OD8525 is incredibly simple to install and to integrate with measurement and control equipment.  The OD8525 fluorescent technology provides a relatively maintenance free operation and offers exceptionally accurate dissolved oxygen measurements, even when low levels of dissolved oxygen concentration or saturation are present.

The precision at very low levels of dissolved oxygen means that the OD8525 is perfect for mounting on incoming boiler feed water lines, particularly as dissolved oxygen can cause significant damage to boilers in process applications.  The OD8525 is often used in recirculating lines for aquaculture, as well as being particularly suitable within the leisure sector.  With the ability to make adjustments for relative humidity and salinity in a controlled environment, it is also often used in the exotic aquaculture sector.

The OD8525 is a precision dissolved oxygen sensor for semi-permanent mounting into pipework, or for inline or inflow mounting.

The OD8525 uses the fluorescent principle of measuring dissolved oxygen.  This offers significant advantages over the polarographic membrane or Clarke type sensors.  Most notably, the dissolved oxygen is not consumed as it is measured, and a constant flow rate is not required to provide an accurate measurement.

The OD8525 is manufactured in PVC and is suitable for a maximum pressure of 6 Bar.  It is powered from the same two wires that receive the 4-20mA current signal.