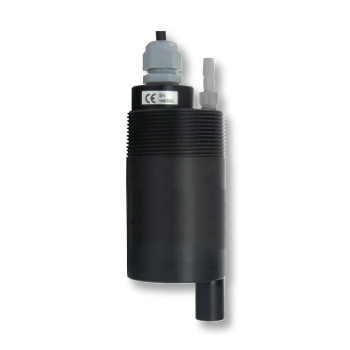 The TU8325 is a Turbidity Sensor with integrated electronics designed to output a 4-20mA signal proportional to the turbidity measurement. The TU8325 is designed to be screwed into a riser tube for submersion into streams, weirs, pits, tanks or other unpressurised vessels.

The TU8325 uses an infrared light emitting source and a 90° photo-receptor to measure back scattering in accordance with ISO 7027 – EN 27027.

Manufactured in PVC with IP68 rating, the TU8325 is designed to be submersed into an open vessel, stream or pit to give continuous turbidity measurements.

The TU8325 is a unique piece of equipment.  It combines a nephelometric turbidity sensor and is offered complete with integrated electronics to provide an isolated 4-20mA output proportional to the turbidity measurement.

The industry standard 4-20mA output signal is isolated into 600Ω and designed to give easy integration with a wide range of control equipment. The 4-20mA signal is simple to connect to a PLC, digital Chart Recorder, universal controller or even our online Data Logger.

As a microprocessor driven device the TU8325 can communicate with a personal computer using a hyper-terminal client and serial interface. By accessing the device the ranges can be adjusted in the instrument software, allowing the same device to measure from as low as 0.001 NTU through to 400.0 NTU. We're also able to factory calibrate the measuring range of the instrument prior to it being despatched.

The TU8325 also offers a digital RS485 output which can be used to connect to a supported device.

The TU8325 has a 2" thread at the rear of the device to allow it to be screwed into a riser tube (such as our model TU90s or TU90-ATC-S) for continuous or online turbidity measurements.

The TU8325 is designed to continuously monitor the turbidity in a stream or tank and is used in applications such as water treatment monitoring, raw water monitoring and other water quality analysis in industrial or municipal environments.

In addition to the rear mounting thread, the TU8325 has an optional auto-clean nozzle, which can be connected to a suitable compressed air system.  The auto-clean system can be called for via a PLC or on an auto-clean relay from of our universal controllers (BC7635-AC or BC7685-AC). The auto-clean system then uses the compressed air to remove any contaminating agent or detritus from interfering with the lens of the turbidity transmitter, thus reducing the requirement for human involvement in preventative maintenance and prolonging continuous operation.

The auto-clean air-nozzle is rated for use with a maximum air pressure of 3 Bar.

The TU8325 is a genuinely unique instrument. It is designed to be permanently mounted into the flow of a weir, stream or into an open tank, to provide continuous turbidity readings. It outputs a 4-20mA signal proportional to the turbidity measurement.

The PVC body and IP68 rating allows the cell to be permanently mounted into a dip tube or riser tube, and with the optional auto-clean system enabled, gives continuous turbidity readings with minimal maintenance.  The isolated industry standard 4-20mA can interface with a wide arrange of PLC's and other control instruments which can easily be connected using just 2 wires.

The turbidity measurements follow the standard nephelometric back scattering methodology (ISO 7027 - EN27027) and the infra-red light is not affected by the colour of the sample.