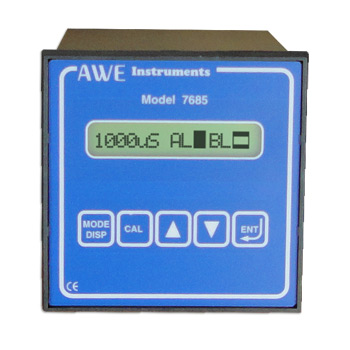 The C7685 Conductivity controller with auto-ranging is available in either panel mounting or surface mounting configuration.

The C7685 Conductivity controller is a precision instrument for reliable, accurate, repeatable and dependable measurement and control of the Conductivity value in many industrial process.

The C7685 is a micro-processor based instrument and as such features a range of options for the accurate control and measurement of conductivity derived measurements.

The C7685 has a wide array of control options including 2 x control relays with On/Off functionality that can be set to High or Low operation. There is a separate alarm relay which can be configured to energise when the conductivity value is outside of parameter. In addition there is a programmable industry standard 4-20mA output which is isolated into 600Ω.

With a 16 character alphanumeric display the C7685 is able to display the conductivity value in either µS, mS or display solution strength in % or Gr/L or Bè for ranges above 20.00mS. The home screen of the C7685 displays the measured parameter, the temperature and the state of the control relays in a single view.

In addition, the operating condition of the conductivity sensor, state of calibration, control points, analogue outputs and alarm setting are easily accessible from the home screen.

In addition the C7685 features auto temperature compensation from a base that is user configurable from 0ºC to 99°C with an adjustable temperature co-efficient from 0-5%.

The C7685 is also an auto-ranging instrument which is perfect for solution strength control applications or where the conductivity value of a measured solution changes of a large range. The instrument will automatically display the range change to ensure that the operator can see the most detailed view of their process.

The C7685 controller is designed for control panel mounting in a 92 x 92mm Din standard cutout and is also available as surface mounting instrument.

The ranges that correspond to each of the accepted cell constants are listed below:-

The analogue output of the C7685 can be configured to either 4-20mA or from 0-20mA as required. The output can be also be set proportionally or inverted to increase granularity or give proportional control to a compatible dosing pump, valve or other compatible control device.

The 4-20mA current output is isolated to 600Ω and is designed to work with control equipment, PLC's, online Data Loggers, Chart Recorders or any other device that takes an industry standard 4-20mA signal.

The C7685 Auto-ranging conductivity controller has 2 x Set-points which correspond to 2 x control relays offering On/Off control. These two control relays are 5 amp non-inductive and can be independently set from one another.

The control relays are also fitted with a user-selectable delay timer where the time can be set from 0-25 seconds as required. In addition the two control relays have an adjustable hysteresis value from ±10% of the set-point.

The C7685 also includes an alarm relay which can be triggered to activate when the measured conductivity value is outside of parameter, with a delay timer of 1 minute. In addition - the alarm relay can be triggered following on from set-point 1 or set-point 2 with an adjustable delay from 0 - 60 mins activation.

With the measurement units displayed in either conductivity or in solution strength metrics, the C7685 is perfectly suited to industrial measurement and control applications.