A Chlorine sensor is designed to measure the amount of chlorine in a solution.

When chlorine is dissolved into water it can appear as a number of different forms when hypochlorous acid and chlorite is formed, this referred to as Free Chlorine which when measured as part of chlorine demand forms our Residual Chlorine. The ratio of hypochlorous acid to chlorite is dependant heavily upon the pH of the measured solution as per the Chlorine section.

Alternatively - depending upon a number of factors including the propensity of nitrogen compounds including ammonia, then chlorine may form as Chloramines which are referred to as Total Chlorine.

Further to chlorine, other strong oxidisers such as Chlorine Dioxide or the anion Bromine can be used as efficient disinfectant or sanitising agents.

There are a  number of different types of chlorine sensors available, each with their own relative merits and suitability for different applications. The common sensor types are:- 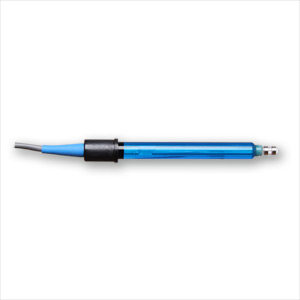 The SZ283 is a chlorine sensor utilising the amperometric methodology with a constant potential to give a dual platinum band potentiostatic chlorine sensor.

Designed for use with our Chlorine Controller range and for mounting inline or in a sample line where a constant flow is present.