Our conductivity simulator is a portable device used to simulate a range of conductivity values for the use in calibrating and isolating errors in conductivity measuring equipment.

Our AWE Instruments Conductivity simulator is often purchased by engineering professionals working in water treatment applications. Conductivity is often used in conjunction with cooling water controllers, boiler blow down systems and in other cooling tower functionality.

Water treatment professionals will often use a conductivity simulator to isolate problems and commission new and existing equipment in the interests of process control equipment and legionella prevention.

One of the main attractions of a conductivity simulator for any Water Treatment, Effluent Treatment or Process Control professional is that it is a significant tool in fault finding and isolation. The most delicate part of any electrochemical monitoring system is the wet end - the part in contact with the process measuring our values of concern. By simulating the incoming conductivity signal a problem can be isolated to the process conductivity cell, the connecting cable, the temperature compensation or even the instrument itself. 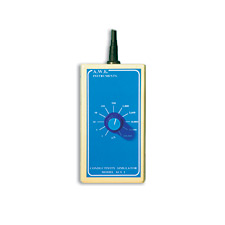 Using precision components the ASC1 replicates conductivity value which can be selected using the front mounted switch. The has the following selectable values:-